When it comes to Sunday, there is something that I wouldn’t miss, which is snacking what people called Kue Pukis. When you eat it in the brunch or even in the evening, while still warm, you can taste it how tender the cookie.

My wife and I used to buy the cookie in the near supermarket, in my case, it is located in near SuperIndo Ciputat, Kue Pukis usually being sold with Kue Bikang which is also very good to accompany you in every occasion. But I don’t know why the cookies never showed up at wedding parties or even in monthly arisan (custom gathering in Indonesia).

Kue Pukis was made from wheat flour and another ingredient like eggs, butter, salt, and sugar. It used to make with a semi-circle. For the flavor, the makers used to add some additional ingredient like Raisin, Cheese, Chocolate and even Bananas.

While Kue Bikang, it seems had similarities with kue pukis, it was made from mixed Wheat Flour, Tapioca Flour, Rice Flour with another ingredient like sugar, salt, and coconut milk. It had differentiation from kue pukis because the looks were very colorful, from green to red or even have a rainbow in it.

So for you who have no snack for the evening, you just can buy that cake in near superstore. Have a nice weekend. 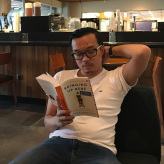